A few months ago, predicting a leadership contest, I joined the Conservative party. I have no particular interest in supporting them, but party members get the final say in leadership contests. For £2 a month I figured that was a good deal.

Sure enough, there was a leadership contest, and the 180,000 party members (instead of the UK population of 65million) will decide who becomes the next Prime Minister.

(Yes, I don’t like them either. But to have even a small chance of diluting the influence of a party base who want to see Brexit delivered even if it literally destroys our economy - the psychic pain of joining is surely worth it for that.)

I’ve already voted for Not Boris. Johnson intends to leave the EU on October 31 “come what may”, and if necessary without an exit deal in place. This would be economic suicide.

Hunt has pledged to leave, but to try to avoid a no deal Brexit, and has ruled out suspending Parliament to push a deal through without the support of MPs. (It seems pretty two-faced for Brexit campaigners to complain that having a second referendum would be a “violation of democracy”, but stay silent when the leading candidate suggests proroguing Parliament to entirely bypass MPs.)

My party membership gets me a ticket to the hustings. Seeing two identikit politicians fight to the death seemed like a decent way to spend a midweek evening, so I headed to the ExCeL Centre last night to attend.

It was extraordinary. If the attendees there were anything like a representative sample of party members, Boris will win by a huge margin.

He arrived on stage to a tremendous standing ovation, with people waving “Deliver Brexit” and “Back Boris” placards. People were filming this - and kept filming long after everyone else had sat down and he’d started his opening speech.

The speech itself was inane. Full of pomp and talk of how great Britain is, how we aren’t going to be pushed around by Brussels, and how we’ll deliver Brexit regardless. A long bit on Mars bars, for some reason - “we will have enough glucose and whey powder to make the Mars bars our children so need”. Pretty glib given Mark Carney has warned of increased food prices of between 6 and 10% if we leave with no deal. 500,000 people in the UK can’t afford enough food to eat; how much will that number rise with a 10% increase in the cost of food?

He finished by waving a vacuum-packed kipper given to him by the editor of the Daily Express. Brussels eurocrats had forced some poor kipper smoker to include an ice pack with his mail order kippers, you see, thus eating into his profit margins. Once we leave, we won’t have to put up with this sort of nonsense!

Except of course we will. If we want to export to the EU we still have to abide by their trade regulations just as we currently do; if they require ice packs with kippers then that’s what we’ll have to do. And if we crash out of the EU, that kipper smoker will also be charged 12% tariffs on his EU exports.

Another standing ovation after his speech. Hunt went next. (People were streaming out of the auditorium as he was speaking.) He was wholesome, but wooden and constipated. Boris is funny, and a better rhetorician. And amazingly, in spite of his history of offense and deceit - people love him. The betting markets agree; £100 on Boris on Betfair Exchange will net you £2 profit if he wins.

The next six months will be very strange.

(Edit: turns out the kipper thing is just a naked lie.) 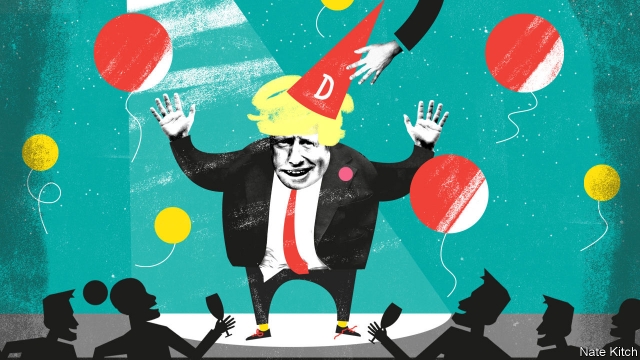 I've pledged to give 10% of my income to highly effective charities working to improve animal welfare. If my startup is successful, I hope to give away much more.