Turns out the satellites that power Iridium satphones, beloved of supervillains and Jack Bauer alike, have an interesting feature: their antennas are arranged such that, as they orbit the earth, they briefly reflect sunlight down to us. 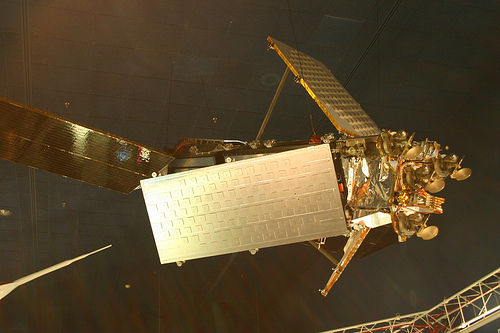 The three enormous reflective antennas, set at 120 degrees around the body of the satellite, point towards Earth like the head of an arrow. When the satellite passes perpendicular to the sun, it reflects a bright burst of light at the Earth’s surface. As the position of the satellites is controlled, it’s possible to accurately predict when these flashes will appear.

Sadly, the Iridium constellation is being replaced with newer satellites whose antennas don’t cause flares. As this happens, and as the older satellites are allowed to drift out of their controlled orbits, the flares will become less and less regular before stopping altogether. Some observers have already noted that flares aren’t happening as predicted, suggesting some of these satellites have already been “de-orbited”.

So: get your smartphone, download Sky Guide (iOS) or ISS Detector (Android), and get notified of upcoming satellite flares. This might be the end of the rare period where we can watch the sun glint off some sedan-sized chunks of metal we put 485 miles in the sky.