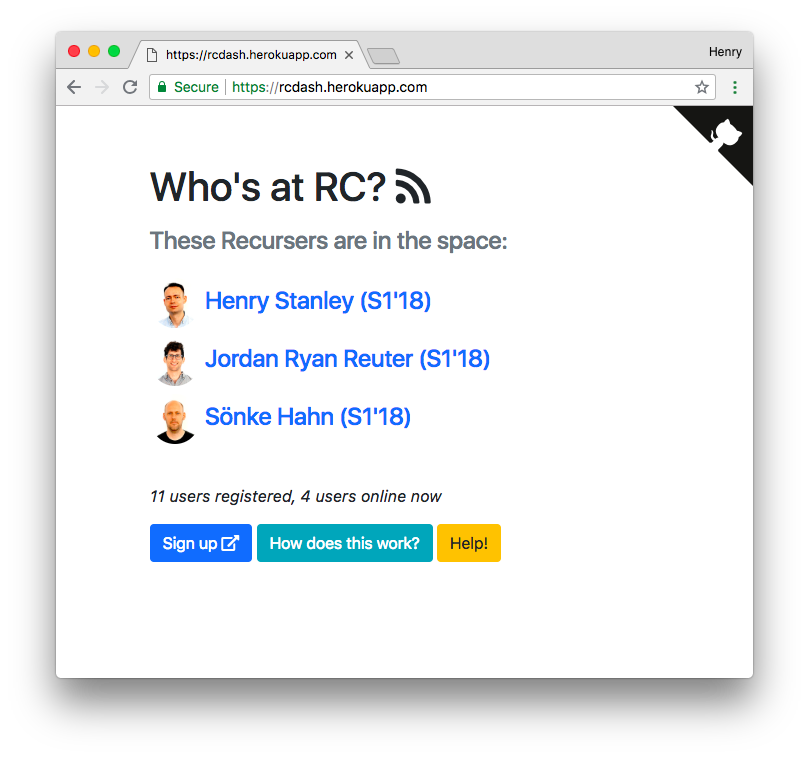 I wanted a way to see who was in the Recurse Center space at any given time – or to be able to check if people were in before deciding whether I wanted to take the L to Manhattan (on a weekend, say).

I figure someone being connected to the Recurse Center Wi-Fi is a pretty good proxy for whether or not they’re in the space.

Every packet your machine sends out has a source and destination MAC address written into it. When you send a packet to a machine on your local network, your computer needs to figure out which machine you’re referring to when you ask for e.g. 192.168.0.12. It does this by consulting an ARP table, which lists the known local machines’ MAC addresses and their corresponding IP addresses.

Why are MAC addresses useful? MAC addresses don’t change1, hence the moniker “burned-in address”. (If they changed, that ARP table wouldn’t be very useful). Tools like Wireshark let you trivially collect packets from a network you’re connected to. If I can snoop on these packets, have a look at their sender MAC address, and tie that back to an individual, I can see who’s in.

Wireshark has a command-line tool, tshark. I only care about the MAC addresses, not the rest of the packet, so I can set the Tfields flag to only return the eth.addr field:

The source and destination MAC addresses are clearly visible. I still don’t know who they belong to, though.

The payload sent to the chat bot includes the message, plus some details of the sender that Zulip provides, including their email address. I can use that to look them up on the Recurse Center directory to get a photo, a link to their directory page, etc. Now I know what MAC belongs to who.

With all the parts in place, I can start sniffing. A script runs on a Raspberry Pi in the RC space which sniffs MAC addresses and sends a list of seen MAC addresses to a webserver. This server looks them up against users it knows about – and if it finds any, it marks them as ‘seen’:

From here, I can grab a list of ‘recently seen’ users from the database…

…and show them on a nice web frontend (only visible to Recursers, naturally).

Here’s a high-level view of how the finished dashboard works: 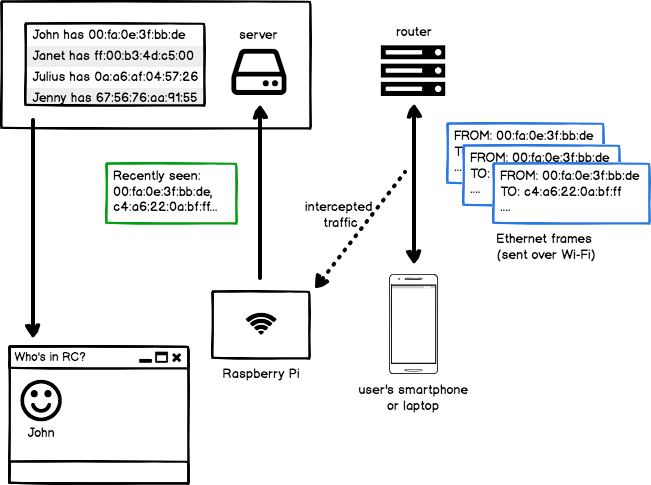 Unfortunately, the project proved controversial from a privacy perspective: not everyone was comfortable with their MAC address being sent to a private server. I ended up taking it offline.

During the conversation it prompted, some interesting alternatives were proposed:

It should be noted, though, that MAC address sniffing is already ubiquitous. It’s being used to track footfall in stores, identify users’ routes on public transport, and even embedded in trash cans to deliver targeted advertising. All of which means your MAC address is almost certainly already public knowledge.

UPDATE: I ended up modifying the sniffer to salt and hash MAC addresses before saving them or sending them over the wire – so I can just match the salted hash without my code ever seeing a MAC address.

I've pledged to give 10% of my income to highly effective charities working to improve animal welfare. If my startup is successful, I hope to give away much more.